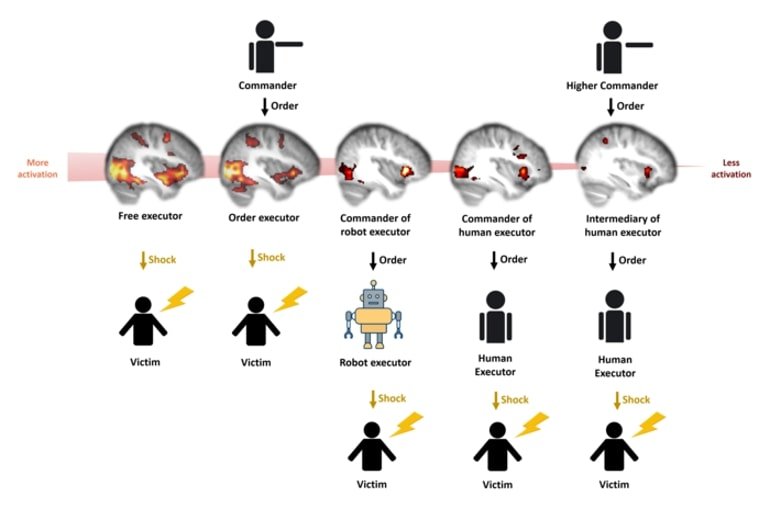 Summary: Powerful hierarchical situations make it easier for individuals to commit harmful actions. The reason for this, researchers say, is because empathy and agency become split across multiple individuals.

Researchers from the Netherlands Institute for Neuroscience show that powerful hierarchical situations make it easier to commit harmful actions, as agency and empathy are split across multiple individuals.

There are numerous historical examples where horrific acts and mass destruction have occurred as a result of a hierarchical structure. A superior communicates a plan and a subordinate carries it out. The superior then bears responsibility for the decision but is distanced from the results, while the subordinate experiences authorship over the action but may experience reduced responsibility for its outcomes.  And in our daily lives too, hierarchy is acquired throughout our society.

In many organizations, orders are embedded in an even longer chain of commands in which a given commander often merely relays on the orders received from a superior. But what effect does this have on our actions?

A new study from the social brain lab looked at how your position within a hierarchical structure (commander or intermediary) influences the sense of agency and empathy for pain. The aim was to understand how these two different neurocognitive processes differ in commanders and intermediaries.

And guess what? Commanders and intermediaries show reduced activation in empathic brain regions when pain is inflicted on the victim compared to people who can decide and act for themselves.

The results were published in the journal eNeuro.

The team used functional MRI (fMRI) and electroencephalogram (EEG) techniques in order to perform their experiments. fMRI measures brain activity by tracking changes in blood flow over time. The changes visible on the scan are related to change in oxygen levels: when areas of the brain are active, they will need more oxygen, causing them to ‘light up’.

Using EEG, brain activity is measured electrically. During this test, small sensors are attached to the scalp to pick up the electrical signals produced by the brain.

The fMRI study shows that activity in empathy-related brain regions was low in both the commander and the intermediary, compared to someone who delivered the shock directly of their own free will.

During the both studies, pain was administered by a human or robot.

The EEG results show that the sense of agency did not differ between commanders and intermediaries, regardless of whether the execution was performed by a robot or a human. However, it turned out that the neural response to the pain of the victim were higher when participants commanded a robot compared to a human.

This suggests that when there is a second human involved, the responsibility tends to be diffused and commanders’ pain processing of the victim’s pain is reduced. Diffusing such responsibility onto a robot is perhaps more difficult.

Emilie Caspar (first co-author of the paper): “The law generally punished those who gave out orders more severely than those who carried out the orders. But what do people feel exactly in a hierarchical chain?

“Recently, Khieu Samphan, one of the main Khmer Rouge leaders, was sentenced to life imprisonment for crimes against humanity and genocide. Yet, he claimed that he did not know what was happening during the Khmer Rouge Era, where millions of Cambodians died of execution, starvation, and diseases.

“It seems that people commanding may not always experience the responsibility they should, an aspect which would nonetheless be crucial to avoid mass atrocities.

“This is why it is important to understand better their subjective experience and how their brain processes the consequences of their orders, to perhaps in the future offer interventions that would prevent a diminution of responsibility in hierarchical chain”

Kalliopi Ioumpa (first co-author of the paper): “These results complement previous research showing that hierarchy has a measurable effect on people’s behaviour and brain activation, making them less engaged in the harm they cause.

“This study can raise questions on how we can ensure that people feel responsibility despite being in a hierarchical chain. Is it easier for executors to take responsibility over their actions since they are the ones acting – or for commanders because they bear the responsibility of the order?

“We show how powerful hierarchical situations can facilitate committing actions that harm others, as agency and empathy are distributed across multiple individuals.”

Prof Dr Christian Keysers (One of the senior author of the study heading the lab in which it was performed): “Times are changing. The solder at the forefront, whose empathy sometimes prevented the worst atrocities, is increasingly replaced by drones that feel no empathy. Has this removed any empathy from the chain of command? Indeed, we find that merely commanding someone to deliver pain reduces how much your brain processes the pain you command compared to directly triggering the pain.

“What was really exciting to see, however, is that knowing that you command a machine, that you cannot defer the responsibility to, restores some of the reactions to the pain in commanders.

“Perhaps there is hope, after all, that the empathy we reduce at the forefront might be replaced – at least in part – by an increase is the sense of responsibility at higher levels in the hierarchy…”

Information about the authors:

The study was performed by Dr Emilie Caspar and PhD student Kalliopi Ioumpa under the supervision of Dr Christian Keysers and Dr Valeria Gazzola, who lead together the Social Brain Lab at the Netherlands Institute for Neuroscience, a research institute of the Royal Netherlands Academy of Arts and Sciences. Dr Emilie Caspar has since become an associate professor at Ghent University.

Commanding or being a simple intermediary: how does it affect moral behavior and related brain mechanisms?

Psychology and neuroscience research have shown that fractioning operations between several individuals along a hierarchical chain allows diffusing responsibility between components of the chain, which has the potential to disinhibit antisocial actions.

Here, we present two studies, one using fMRI (Study 1) and one using EEG (Study 2), designed to help understand how commanding or being in an intermediary position impacts the sense of agency and empathy for pain. In the age of military drones, we also explored whether commanding a human or robot agent influences these measures.

This was done within a single behavioral paradigm in which participants could freely decide whether or not to send painful shocks to another participant in exchange for money.

In Study 1, fMRI reveals that activation in social cognition and empathy-related brain regions was equally low when witnessing a victim receive a painful shock while participants were either commander or simple intermediary transmitting an order, compared to being the agent directly delivering the shock.

Source reconstruction of the EEG signal revealed that this effect was mediated by areas including the insula and ACC. Results are discussed regarding the interplay between the sense of agency and empathy for pain for decision-making.

Cytomos: Scottish biotech shakes up leadership ahead of Series A