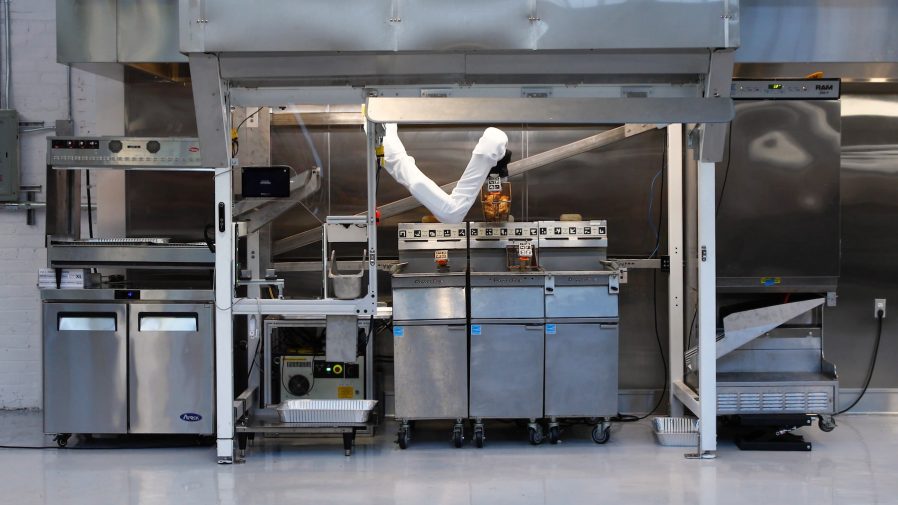 US food automation company Miso Robotics has entered the UK market with its automated fryer robot, “Flippy 2”, which has been taken on by a restaurant in the Midlands.

Using computer vision, a subset of artificial intelligence, Flippy can detect and cook over 45 items of food, according to the company.

Mike Bell, CEO at Miso Robotics, said: “Bringing Flippy to the UK is a true testament to all of the hard work our team has done from both an R&D and innovation standpoint.”

The company’s other robots are “Flippy Lite” a smaller version of the frying robot and “CookRight Coffee”, a coffee monitoring system. It also plans to launch “Sippy”, a drink dispenser/ sealer, and a version of its automated fryer for chicken.

In the US, the food robots are used by restaurants White Castle, Jack in the Box, Arby’s and Wing Zone. Miso said its fryer robot has been ordered by the Midlands branch of “one of the largest quick-service restaurant brands in the world”. has contacted Miso for more details.

The California-headquartered company has also expanded its Series E round on the crowdfunding platform Crowdcube and is targeting £1.5m to add to its existing $70m (£59m) in funding.

Cash raised from crowdfunding will fuel the firm’s UK growth.

In the US, Miso Robotics’ Flippy robots have cooked more than 400,000 lbs of fried food and have clocked in almost 31,000 hours of automated cooking.

Jacob Brewer, chief strategy officer at Miso Robotics, commented: “We’re hoping this partnership will be the first of many in the UK market. After all, brands across the hospitality sector can benefit immediately from the power of our hero products, with little to no adaptation.”

Competitors to Miso Robotics include London-based Karakuri, which makes an automated fryer and robot arm that can make personalised meals.