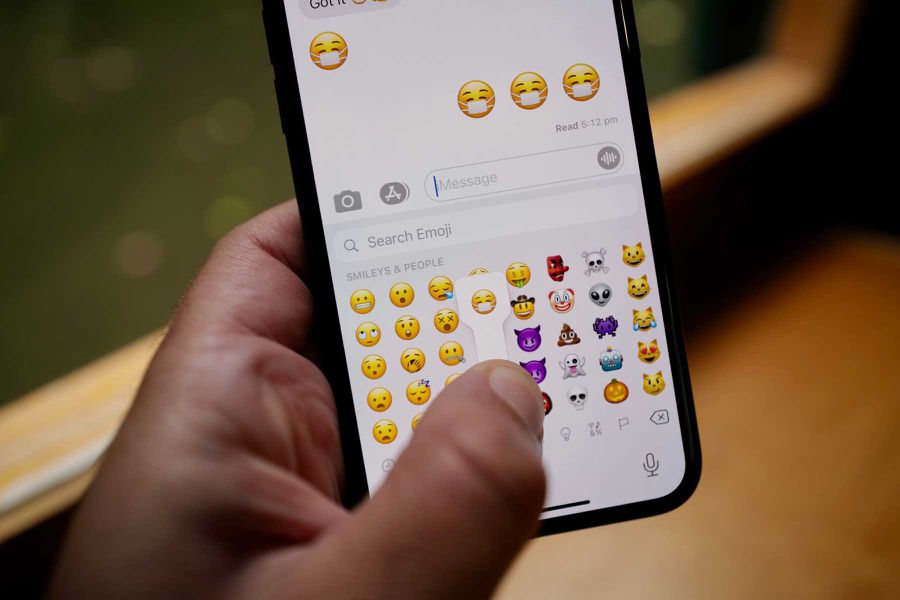 It’s all in the eyes! Apple’s new version of the masked emoji indicates the face is grinning instead of grimacing behind the facial covering.

Apple’s mask-wearing emoji will be turning its frown upside down in the midst of the global pandemic, during which mask-wearing has been proven to help slow the spread of the coronavirus, according to the Centers for Disease Control and Prevention (CDC).

Since the emoji officially called “Face with Medical Mask” was introduced to Apple’s iPhone operating system in 2008, the expression reflected in the eyes has been one of discomfort associated with being sick, according to a post written by Emojipedia’s Chief Emoji Officer Jeremy Burge.

Google and Samsung’s version of the graphic had even included a sweat bead to emphasize the point, but Samsung revised the emoji in March. “A number of these designs changed over time, and today most platforms use a fairly consistent design where the only facial feature is closed or downward-facing eyes,” Burge wrote, adding that WhatsApp’s version with neutral eyes might be the “safest option of all.”

But in an update that will come with Apple’s iOS 14.2, according to Emojipedia, the eyes of the masked emoji will have a drastically different appearance, with the downward eyes traded out for blushing cheeks and new eyebrows that resemble the facial features of its “Smiling Face” emoji.

Currently in a beta phase, the new take on mask-wearing will roll out to the public in coming weeks, likely in October or November, Emojipedia reports. The new update will also include other long-awaited emojis, including a transgender flag, bubble tea, blueberry, olive, seal, feather, and accordion.

As with other new emoji roll-outs, those who don’t update the system will continue seeing the former version until they upgrade their systems. “Any change to the emotion of an emoji isn’t ideal, as we always want to be clear in how we portray ourselves even in text-based emoji form,” Burge writes in the post.

Back in July, Washington, D.C., resident Shohsei Oda started a petition to “Design a smiley mask-wearing emoji for Apple iOS,” along with a mock-up. It received 200 signatures out of the goal of 500. “I don’t want to make this seem like any more of a noble petition than it is,” Oda told. “But I think it’s an opportunity to normalize mask-wearing when, for the last couple months in this country, wearing a mask has become somehow a politicized issue.”

While it’s unclear if his petition had an impact on the change, the sentiment is captured in the emoji scheduled for the upcoming release. “Among other minor emoji changes buried in the beta release of iOS 14.2, this subtle change to Face with Medical Mask appears to carry the most weight, in the sense that mask wearing has become a somewhat political act in the United States,” Burge, who is also a current member and former vice president of the Unicode Emoji Subcommittee, writes. “It’s a very 2020 emoji update.”