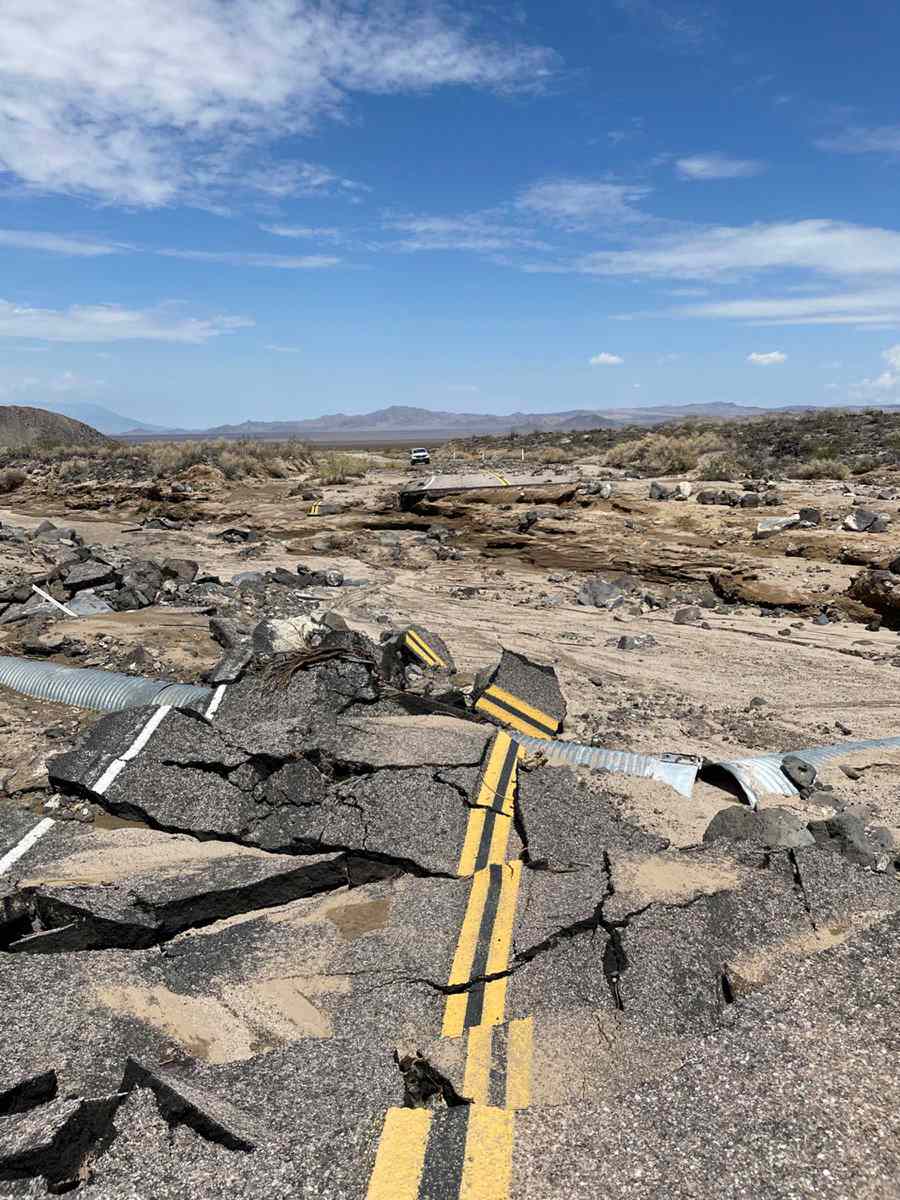 "No park roads are currently open to recreational travel due to ongoing safety concerns and active road work."

“The heavy rain that caused the devastating flooding at Death Valley was an extremely rare, 1000-year event,” National Weather Service Las Vegas meteorologist Daniel Berc, said in a NPS statement released Sunday, calling the rain “a historic event,” as there’s only a 0.1% chance of occurrence. Preliminary data at the park’s Furnace Creek showed 1.46 inches of rainfall Friday, which is the equivalent of a year’s worth of rain within three hours. It also just falls short of the record of 1.47 inches.

All roadways were shut down on Friday following the unprecedented rainfall, which left 1,000 people — about 500 visitors and 500 park staff members — stuck in the park and unable to exit. About 60 cars were also buried in debris near the Inn at Death Valley. On Sunday, the park announced everyone had been able to travel out carefully on the damaged roads and that there were no injuries.

“It sounded like the world was ending,” John Sirlin, a visitor who was trapped, but is now safe, told “And then just this rushing water everywhere in a place that’s usually absolutely bone dry — it was pretty incredible.”

The California Department of Transportation is expected to reopen parts of State Route 190 on Tuesday between Pahrump, Nevada, and Cow Creek — the park's residential and administration area, where about 600 feet of a water main was destroyed. Tuesday's opened roadways should provide access to the Furnace Creek visitor's center and private hotels.

Even so, the NPS noted, “Park roads are expected to remain closed for days to months depending on the severity of damage,” adding that “no park roads are currently open to recreational travel due to ongoing safety concerns and active road work.” The local Caltrans district also posted on its Facebook page Sunday that State Route 190 would remained closed for “the next few days.”

In addition to the road closures, the NPS has also currently issued an “extreme weather” alert for the current “stormy” conditions.predicts stray showers and thunderstorms all week.

“Death Valley is an incredible place of extremes,” Death Valley National Park superintendent Mike Reynolds said in a statement. “It is the hottest place in the world, and the driest place in North America. This week’s 1,000 year flood is another example of this extreme environment. With climate change models predicting more frequent and more intense storms, this is a place where you can see climate change in action!”

The area has long been prone to severe weather, as a record-breaking October 2015 thunderstorm brought a typical year’s worth of rain in five hours, causing the largest flooding to the park’s Scotty’s Castle since it was built in the 1920s, according to the NPS. Both the castle and Bonnie Claire Road (Highway 267) have remained closed since and aren’t expected to reopen before April 2023.

This Traveling Family Is Still Creating ‘Bucket List’ Moments, Even Though Their Adventures Are on Hold