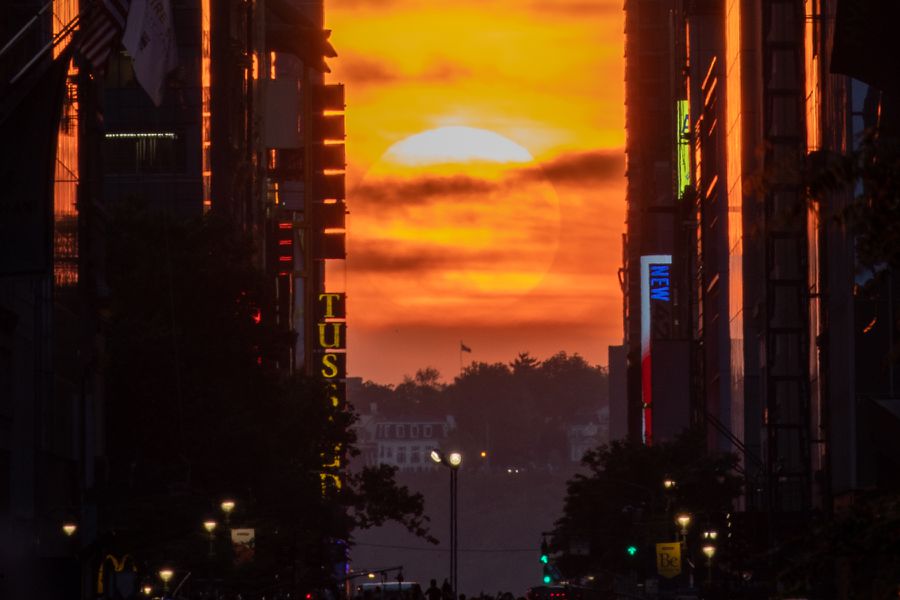 Manhattanhenge is seen during sunset between 42nd Street in Manhattan of New York City, United States on May 30, 2022. Photo: Tayfun Coskun/Getty Images

Something special happens in New York City a few days a year: the sun aligns perfectly and, for a few moments, creates an almost magical spectacle of light between iconic buildings in the skyline known as Manhattanhenge.

It happens during sunset and only on a few select blocks on a few select days, but viewers who catch the spectacular display are in for a treat. One of several special night sky events this month, Manhattanhenge is only visible for a few minutes and people who want to see it should arrive early before the sunset.

“For the best views of Manhattanhenge, head to a sidewalk on a major Manhattan cross street that runs from west to east with unobstructed views,” the New York City Department of Parks and Recreation wrote on its website. “Face west towards the sunset. Don’t forget your camera — go further east to get the best shot!”

This is everything people need to know to get the best view — and best Instagram photo — of Manhattanhenge.

Manhattanhenge is a phenomenon that occurs when the sun perfectly aligns with the buildings in New York City to create the effect that it is setting equally on both sides of the street. New York City is uniquely laid out with a grid system that looks directly onto a clear view of the horizon (the Hudson River offers this on the West side), according to the American Museum of Natural History.

"And tall buildings that line the streets create a vertical channel to frame the setting Sun, creating a striking photographic opportunity," the museum wrote. "So Manhattanhenge may just be a unique urban phenomenon in the world, if not the universe."

When will Manhattanhenge occur?

"Manhattanhenge lasts for only a few minutes at sunset — get there early!" the Parks Department wrote.

Where can you see Manhattanhenge?

The phenomenon is based on how the sun aligns with New York City’s grid system and tall buildings. The best places to view it are from Manhattan’s east-west oriented streets: 14 Street, 23 Street, 34 Street, 42 Street, and 57 Street.

Sun watchers can also catch the spectacular sunset from the Tudor City Overpass in Manhattan, and from Hunter's Point South Park in Long Island City, Queens.

This Travel Backpack Can Give You a Massage on the Go