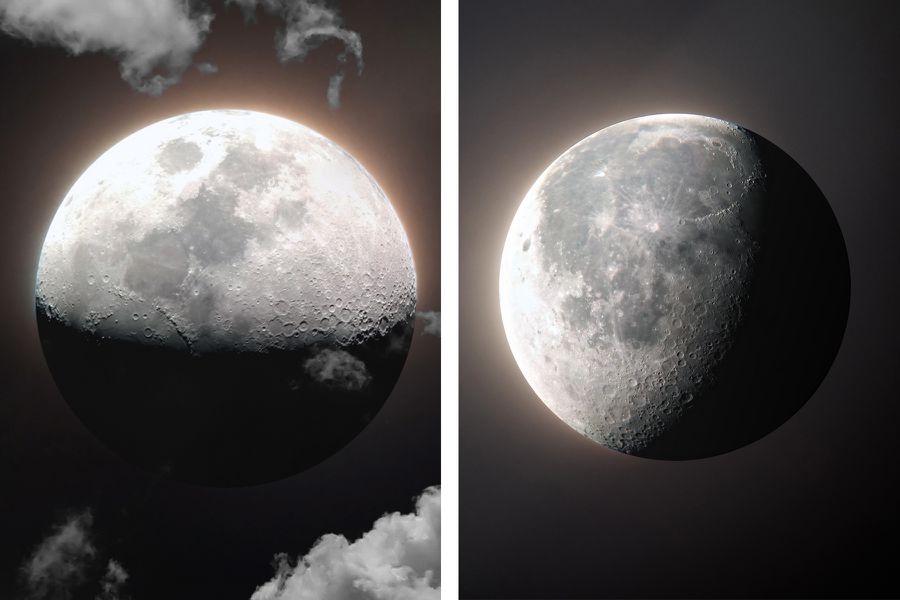 Photographer Vijay Suddala attached his phone to a telescope to create these impressive composite images.

For the vast majority of the population, photographing the moon with your phone often produces pretty lackluster results, no matter how great the camera is. But that’s not the case for Vijay Suddala.

The 18-year-old "smartphone astrophotographer" created these stunning composite images of the moon, using photographs taken with his Samsung Galaxy M21. Of course, he had a little help from a telescope, the Orion Skyscanner 100mm, to get such a detailed shot.

Using an adapter kit to sync his two devices, Suddala takes multiple photographs of the moon using the ProCam X app, which allows you to adjust the ISO and shutter speed on your phone's camera. That way you can control the exposure, ensuring that the image's highlights are not blown out, which would make the moon lose detail in the photograph. He then stitches them together to create a highly detailed composite image.

Finally, he gets to work in Photoshop — yes, these photographs are not what shows up in his phone's gallery! "They are artistic in nature and never 'real,'" Suddala told . But Suddala isn't manipulating the images so that they're practically unrecognizable from what he shoots in-camera. He's making simple enhancements — adjusting the color and sharpening the image, for instance.

But sometimes he take his images to the next level by implementing something called "high dynamic range," or HDR. An HDR image is a composite image that layers photographs of the same subject with different exposures, which helps in high-contrast scenarios — such as the bright moon against the night sky. In Suddala's case, he takes an overexposed shot of the moon and overlaps it with his regularly exposed shots. "This will give a nice glow to the moon," he told T+L.

Suddala also enjoys playing around with clouds in his composite images, which he photographs during the day, then using Photoshop to add them to his moon shots — these images are truly artistic, as they're not representative of a real scene.

In any case, Suddala shows impressive technical and artistic skill with his lunar photography, which you can see more of on his Instagram page.