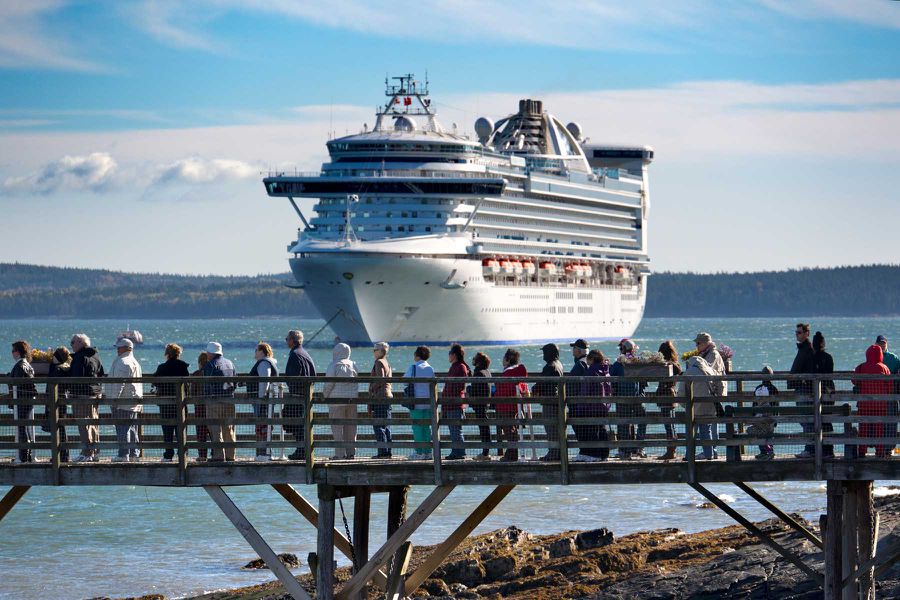 The cap will apply to ships with over 200 passengers.

Under the new rules, ships like the Caribbean Princess (above) would not be able to sail into Bar Harbor, Maine. . Photo: Planet One Images/Universal Images Group via Getty Images

The cruise recommendations, which have been accepted by the town's council, will limit the number of passengers allowed to disembark to 3,500 in July and August, and to 3,800 in May, June, September, and October, Kevin L. Sutherland, the Bar Harbor town manager, told . Additionally, no cruise ships will be allowed to dock in the shoulder months of November and April (which still sees the occasional snow storm).

"There's community concern that there's just too much," Sutherland told T+L. "I don't know if it's strictly cruise lines or if it's the shift to the desire to be in outdoor settings over the last few years… but it makes it very hard for our small town to absorb."

Sutherland said he will now work to negotiate agreements with cruise lines. A spokesperson for the Cruise Lines International Association (CLIA), which represents cruise lines across the world, did not immediately respond to a request for comment from T+L.

U.S.-flagged cruise ships with fewer than 200 passengers would be exempt from the limits.

All caps will be applied starting in the 2023 season, but the town will honor any ships that were already booked under the previous daily passenger numbers, CruiseMaine told T+L.

Sutherland added there's a citizen's petition on the ballot in November that, if passed, would go even further and limit cruise visitors to no more than 1,000 per day.

Previously, Bar Harbor, which serves as a popular jumping off point for both Acadia National Park and cruises to Canada, has capped cruise ship capacity at 5,500 passengers per day. In April, the town welcomed its first cruise ship in more than two years.

In total, just over 450,000 passengers are expected to step off a boat in Maine this year.

Bar Harbor has worked hard to expand tourism during its previously-quieter months, Sutherland said. But now the town is struggling to find the balance.

"That was the goal of the Bar Harbor community years ago when they said they wanted to extend the shoulder season. The efforts of attracting the cruise ships here has created a whole market in the Northeast and Canada," Sutherland said. "I think the cruise lines have optimized the September and October usage… to an extent where there is now pushback."

How to Deal With Sleep Problems During Heat Waves – Neuroscience News